Professor Sohail Inayatullah, a political scientist, is the inaugural UNESCO Chair in Futures Studies. Since 2000 he has been at Tamkang University, Taipei (Graduate Institute of Futures Studies); Associate, Melbourne Business School; and instructor at www.metafutureschooo.org. From 2011-2014 he was Adjunct Professor, Centre for Policing, Intelligence and Counter-Terrorism, Macquarie University, Sydney; and from 2001-2020 he was Adjunct Professor at the University of the Sunshine Coast (Faculty of Social Sciences and the Arts).

In 2010, he was awarded the “Laurel” award for all-time best futurist by the Shaping Tomorrow Foresight Network. In March 2011, he was awarded an honorary doctorate by Universiti Sains Malaysia, Penang. In 1999, Dr. Inayatullah held the UNESCO Chair at the Centre for European Studies, University of Trier, Trier, Germany and the Tamkang Chair in Futures Studies at Tamkang University, Taipei, Taiwan. He was also David Sutton Fellow at the International Management Centres Association in 1999. From 1981 to 1991, he was senior policy analyst and planner with the Hawaii State Judiciary, where he coordinated the Court’s Foresight Program. 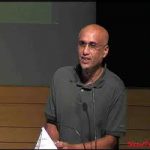