Over the years, Olfa has supported a diverse range of clients ranging from The United Nations to Telecom companies. She has worked extensively in the Banking industry for HSBC, Barclays, Santander, Lloyds and BNP Paribas Fortis on a variety of Change Management Projects.

Olfa is an experienced Scenario Planning consultant who has collaborated with The Futures Group (later absorbed by Deloitte), and is now a lecturer at the Hult International Business school where she recently coached and taught 300 business students how to apply Scenario Planning on a 10-year horizon.

Olfa’s background is in international affairs and political sciences. She studied at Sciences Po in Paris and obtained a Masters degree from the Fletcher School of Law and Diplomacy (jointly managed by Tufts and Harvard University).

Olfa holds French and Tunisian citizenships and speaks seven languages of which three fluently (French, Spanish and English). She has lived in ten countries and worked in Japan, the US, Canada, Belgium, France, Spain and the UK. 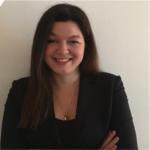